How to Get Glassdoor Reviews Removed: Proven Tips & Tricks

Glassdoor works like a gateway to the company’s inner culture and unharnessed territories.

Companies can no longer consider glassdoor reviews as an unimportant part especially in this era of digitalization. And why not? Everyone starting from an employee to an employer and investor check a company’s Glassdoor reviews in the first place before establishing any relationship.

According to the U.S. site survey, over 70% of people google glassdoor reviews of a company in order to inspect their perspective. The site’s monthly visitor is above 57 million which pretty decently highlights the significance of having positive reviews.

Most candidates seek information on this site to peep into a company’s culture before applying for an interview. That is one of the reasons why the site garners such a volume of traffic every single month.

And of course, there is no harm in saying that those who have got one-start reviews on this site are less likely to get the best talent. Isn’t it?

Take this for an instance, When you see a job post and hit the apply button, the company’s glassdoor review plays an important role in your mind. You probably won’t apply for a company with a 1-star review, isn’t it?

So, in case your companies have received plenty of negative reviews, what will you do?

We know you have already worried a lot thinking about this question repetitively. So, this article pertains to an in-depth guide on Glassdoor and its proven methods of removing reviews from the glassdoor website.

Why Are Glassdoor Reviews Important?

Glassdoor ranks up at the top of the search engine result page when someone searches for a company name, Which means potential job seekers, hiring managers, and recruiters are going to check your company’s review in the first place. And negative reviews can damage people’s perception of your company.

Let us show you our glassdoor reviews and how well this site ranks on the search result. 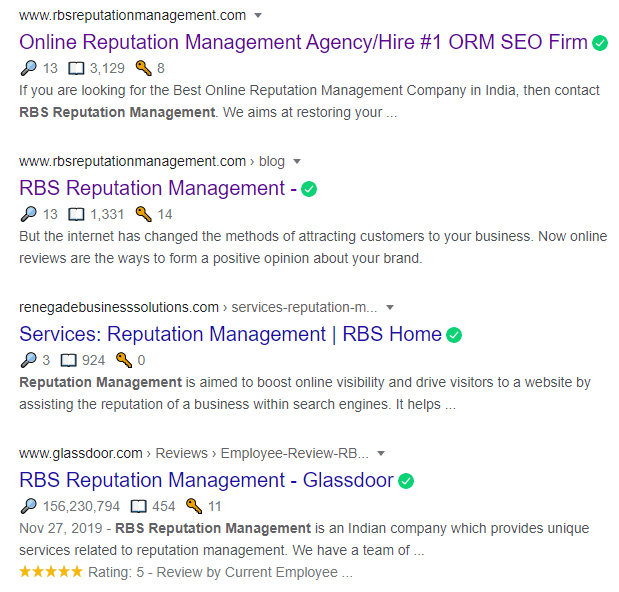 It’s pretty clear that this site is a powerhouse for tweaking someone’s perception of the company.

Low and negative reviews are the signal to the company’s dysfunctionality and internal issues. Apart from that, there are several other reasons why it’s wise to avoid negative reviews. Let’s take a look,

Glassdoor reviews impact the company’s polished online reputation.
Negative reviews on glassdoor may sideline other entrepreneurs or investors in starting a new venture with the company.
It can hinder you from obtaining the best talents in the industry.
Half of the consumers like to do business with the companies having above 4.0start reviews.

Therefore to put it simply, glassdoor website’s reviews help you to build credibility in the virtual world. It’s a great way to assess a company’s employee engagement policies, brand value, work culture, and whatnot.

So, if you’re shaken with a couple of negative reviews on Glassdoor and finding ways to remove them, then we surely won’t disappoint you. Let’s move along,

How to Get Glassdoor Reviews Removed?

Glad that you’ve decided to remove the negative Glassdoor reviews. Most companies don’t even pay heed to this unless their reputation starts deteriorating.

So, speaking of the ways to remove glassdoor reviews, you might be thinking, does glassdoor remove reviews? Unfortunately, glassdoor has a stringent policy when it comes to removing reviews.

You can’t remove reviews unless you have legal reasons to do that. However, there are other possibilities as well. We’ll be discussing all the possibilities here.

Flag a Review as Inappropriate

In order to maintain the decency of the platform, Glassdoor has set community guidelines which the reviewer should follow. If a person violates this community standard, then you have all the right to contact the glassdoor website for removing the review.

For example: If the review looks like, “The company hired only terrible engineers who don’t know coding and basic corporate behaviors.” Or if a person’s name is mentioned in the review who is not the head of the company or doesn’t belong to the higher authorities, then the review can be challenged.

For instance: If the review looks like, “ Employees from “ABC” countries don’t like to socialize with “XYZ” country’s citizens. These stereotypes reviews can easily be removed from the glassdoor website.

If the review looks like, “The company is earning $abd from “ABC” client and planning to expand their businesses in a short time.” This type of review can also be removed from the Glassdoor site due to holding internal information about the company. 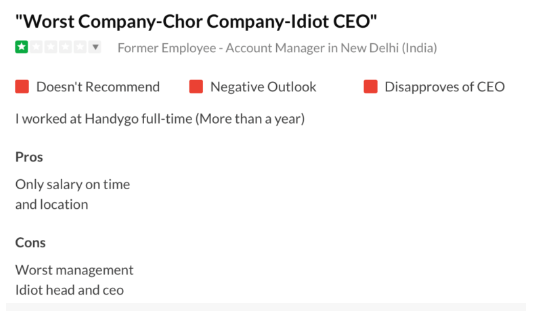 This kind of review can be removed from the Glassdoor website once you flag them as inappropriate. Although there are other ways to remove that so let’s take a look at the alternatives as well.

The easy way to remove Glassdoor reviews is to ask the reviewer to take it down. It’s a better approach to settle things up in a positive and decent way. But, if the employee still worlds in your company, then it becomes quite a challenge as he or she won’t reveal her name.

In this case, a general conversation with everyone and assuring them saying, “we have been receiving too many negative responses on Glassdoor. But, we are trying every means to improve the situation and understand everyone’s concern…”

This conversation can improve an employee’s trust in your company. And in case the reviewer is your former employee, then it’s better to ask him if he needs any help. There is always a reason behind a person’s grudges. So, you can talk to the person and sort it out. In exchange, you can provide him some tips for his career growth or write him a LinkedIn recommendation, etc.

If you’re still disappointed in having a bunch of negative reviews on your Glassdoor profile, then it’s best to suppress the reviews in a number of ways. Suppression will naturally bring out the positive reviews on the top and push the negatives down on the glassdoor website.

Take a look at a couple of ways how you can suppress the Glassdoor profile reviews,

Whether you are worried about plenty of negative reviews or you’re not, profile optimization is a must for every company on Glassdoor. It will help you to keep up the positive reputation and ward off against defamers.

There are online reputation management tools through which you can run an analysis of profile visits, comments, and other important parts. You can also feature positive reviews on a company’s page so that people can check the positive reviews in the first place.

Responding to positive and negative reviews is a basic idea to keep up a positive reputation for a company. Even research says that 62% of people reported their perception of a company changed after the CEO responded to the review.

So, whether someone is commenting positive or negative, it’s a must for the company’s heads to respond to them. This will help to tweak people’s perceptions. If you believe in this idea that responding to negative reviews ignites the situation, then it’s a myth you’re believing.

In fact, ignoring negative reviews emphasizes a company’s inefficiency in performing a certain responsibility. Therefore personalized responses and sincere apologies in case there is a genuine mistake from your end will definitely help in the long run.

The best way to fetch some positive reviews is through your current employees. Former ones have already shown their grudges and frustration with the role and company. But, there is a pretty decent chance that the present employees may feel welcomed at your company if you focus on some changes.

So, the best way to motivate employees to submit positive reviews include,

Else, you can hire an online review management expert to manage these reviews on Glassdoor website. This will help you to maintain your reputation in the long run.

But make sure you don’t ask all the employees to submit reviews at once. Else it will be considered as suspicious activity on glassdoor.

Glassdoor website is the best place to have a peep into your company’s inner culture and core ethics. Some of the grudges and concerns of employees are genuine, which requires your attention.

It’s an ideal way to reshape your company’s structure based on people’s suggestions and improve their reputation authentically.

Even with this tiresome approach to remove negative reviews from Glassdoor websites, there might be times when Glassdoor or the user rejects your request removal. In this case, if your concern is genuine and holds substantial evidence to prove the reviewer wrong, then there is an option to file a lawsuit. But, Glassdoor always will try to protect its user’s anonymity and legal action may not bring intended results every time. Therefore, it’s wise to use the other approaches first to remove the negative reviews from the Glassdoor website

Most of the companies don’t pay heed to negative Glassdoor reviews which is the biggest mistake for them. Reviews, be it positive or negative, should always be kept monitored in order to track your reputation. Since people from all areas of the world can access a company’s virtual reputation, reviews especially on sites like Glassdoor should always be kept in check. You can either optimize your profile by yourself or hire an online reputation management agency to help you out.

Get our daily newsletter from RBS's Founder Sourabh Sharma about the latest reputation blogs in the industry!